THE FLUORIDE DECEPTION
by Christopher Bryson 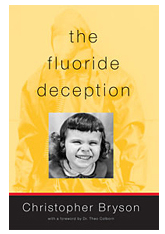 Second Look’s rational approach to controversial public policy issues means that we are continually striving to sift the facts from the politics and emotion that are inevitably involved with such issues. Christopher Bryson’s new book, The Fluoride Deception, published by Seven Stories Press in 2004, is successful in helping us do just that with the mother of all controversial public policy issues, water fluoridation.

This heavily documented, well written, and explosive exposé of the political histories of "fluoride" and of the public policy of water fluoridation should not — and will not — go ignored. Bryson, an award-winning investigative journalist, has done his homework and has painted a shocking picture of the events and personalities behind this public policy that is still defended at the highest levels of government and the health professions.

With a telling foreword by Dr. Theo Colburn, a respected scientist who co-authored Our Stolen Future, the watershed book on endocrine disrupting chemicals in our environment, The Fluoride Deception should put much of the controversy of the fluoridation public policy to rest.

This book is a page-turner, an eye-opener, and a hair-raiser that reads like a mystery novel. Here are two of the advance reviews about this book:

"Christopher Bryson is an excellent narrator, and he reports on recent research previously not known to me. Especially I am intrigued by the story about Phyllis Mullenix and her animal research on the influence of fluoride on behavior and brain development... It is my sincere hope that his book will receive the attention it deserves and that its implications will be seriously considered."
DR. ARVID CARLSSON
2000 Nobel Prize Laureate for Medicine

"In much the same way biologist Rachel Carson warned us over forty years ago in Silent Spring about the havoc and harm being caused by the misuse of persistent pesticides, journalist Christopher Bryson here lays bare the secret story and hidden dangers of the introduction of fluoride chemicals from the cold war era into our drinking water. The Fluoride Deception presents a scorching indictment of how researchers and health care officials working closely with government agencies, big industry, and their attorneys have allowed themselves to surrender their responsibility for the medical well-being of their fellow citizens."
DR. ALBERT W. BURGSTAHLER
Emeritus Professor of Organic Chemistry, University of Kansas